Arcadia – among many words with an etymology that leads many on a trail of it in numerous uses, meaning many different things to many different people. From its ancient Greek utopian coinage, to long-standing use in culture and inevitably amusement arcade businesses in more recent centuries, possibly one of the most well-loved and cherished of those uses has been for Japan’s Monthly Arcadia (アルカディア); a “Coin op’ed Videogame Magazine” or “Arcade Video Game Machine Magazine” depending on which official subtitle you’d like to believe. A summarisation of its inception, active period, and demise is essential to understanding part of the Japanese arcade scene’s recent history. 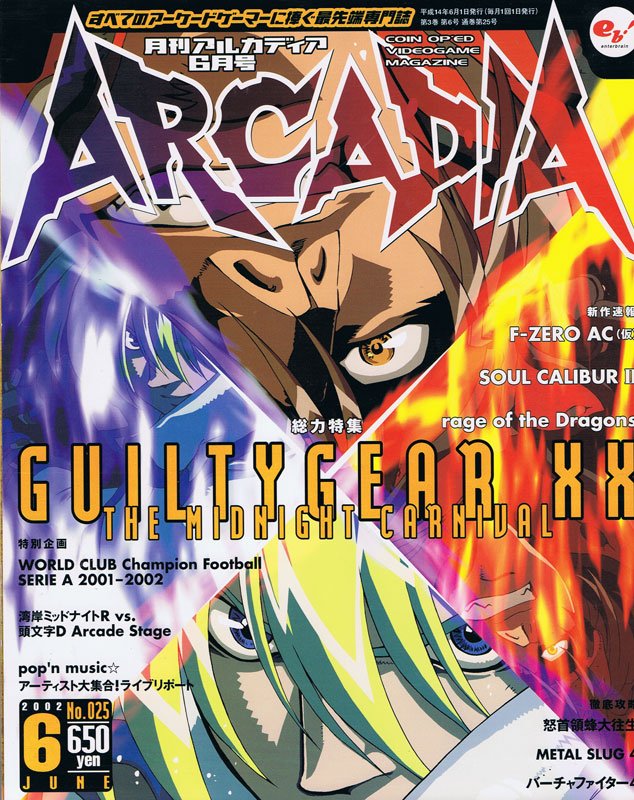 The background of Arcadia’s rise is a troubled point for arcades, even in its strongholds of Japan. Not since the new fueiho law scares of 1984 that inspired giants like Sega and Nintendo to innovate and open up new console-based streams of revenue had the country’s amusement trade seen such difficulty – and as with many things, it was all the blame of many coalescing problems. These were visible and growing as early as 1994, but never truly fixed, despite members of governing bodies like JAMMA noting that a widening crisis existed.

For all their eventual ubiquity in Japan, some game centers were arguably no better than their western equivalents. Operators went overboard on high short-term profits that would flatline, culprits including the Print Club ‘purikura’ boom. With many chains, some 1000-strong, the country was saturated with locations. Something of a creative decline set in, too; defining moments such as Virtua Fighter were absent. And despite the synergy of shared hardware, one part of arcade appeal, performance superiority, was tapering.

With a sink-or-swim moment for the Japanese amusement giants evident by the time of the new millennium, compromises enticing the public back were eventually found by some in new technologies and gimmicks – a more pronounced industry decline was partially neutralised by these, with the older ‘stick and button’ players, albeit slightly reduced, still also somewhat hanging in there. And as this trend upheaval began, an attempt was made to ossify its older appreciators via a fittingly traditional method, magazines.

These were not new ground for arcades. In 1986, Gamest was launched. Written by a group of arcade game doujinshi writers hired by Shinseisha, it went on to captivate an audience of young ge-sen enthusiasts through its colourful, in-depth coverage of latest releases. Perhaps most crucially, it still encouraged participation, offering inclusion of readers’ high scores and artwork. Gamest made no end of significant contributions to Japanese gaming culture throughout its late 1980s/early 1990s ascent, overseeing the rise of fighting games.

As rival rags like Arcade Game Magazine came and went, Gamest stood tall as a monumental print ambassador for the country’s game centres. By 1998, though, cracks were beginning to show in Shinseisha’s diversified but fragile empire, built on the limited edition merchandise, spin-off publications, and even chain stores it made to capitalise on the side. This shattered as a result of poor business planning, subsequently bankrupting the publishing house and ending its much-loved magazine abruptly in August 1999.

However, this saga couldn’t just end here. Soon after, much of the editing staff involved with Gamest were moved to Enterbrain, among . With the additional decline of Geibunsha’s Neo Geo Freak magazine, some of its erstwhile writers would join them. Under chief editor Hisanori Hayashi, they would launch Arcadia at the end of 1999; Gamest in all but name, out for its original readership. Although only made as an irregular mook at first, a step back from Gamest’s fortnightly cycle, the magazine shifted to monthly publication by June 2000.

Arcadia’s sales were, at first, satisfactory, still retaining much of what Gamest once great – as had happened often with the latter, future successful artists such as KEI of Hatsune Miku fame would even find their way into the magazine’s fan pages. Lessons having been clearly learnt from Shinseisha’s fall, expansion happened slowly off the back of this, with spin-off magazines and mooks eventually starting to appear again. And after an obscure Typing of the Dead tournament in 2000, the famous Tougeki SBO competitions began during 2003.

Coming out of the doom and gloom of the late 1990s, the Japanese arcade business at first also had more visible rebounds compared to the rest of the world. Whilst in part down to deeper regional and cultural differences in how manufacturers, distributors, and operators alike would often work, this was also owning to the high popularity of titles like Sega’s Derby Owners Club – revolutionising the use of gacha cards for the rest of the next decade – and rhythm games, a hit globally but originating in Japan with the likes of Beatmania.

As the new millenium dawned, Arcadia tried to follow these successful developments in the game center scene. It devoted pages over to Konami’s ubiquitous BEMANI produce, card games unsurprisingly found a way in, the ever-profitable crane and medal games even saw coverage. These were not things that Gamest would have done, but less than encouraging signs for other genres, including fighters, had to be acknowledged. Though players would remain, aided by the ubiquitous Tougeki tournaments, they were still marginalised.

Some of the biggest arcade juggernauts that would then appear during the 2000s  – Mushiking, Taiko no Tatsujin, Mahjong Fight Club – were at odds with Arcadia’s core audiences, reared on diets of fighting games. The magazine was caught between two vinyl stools; a solidified, yet shrinking original readership, and a new opportunity mired by pitfalls and demographic differences. This schism would stick with Arcadia throughout its decline, worsened by wider problems. For one: the proliferation of mobile games.

The advent of smartphones was a paradigm shift for the Japanese video game industries. With decline already seen in arcades before their ubiquity, the sheer success of many mobile titles also made them increasingly bigger business. And with that gaming kick now in your pocket, ostensibly for ‘free’, why bother blowing yen away in a game centre? Amusement heavyweights like Namco were quick to utilise this prospect, creating cross-functionality features and content for mobile and arcade; while novel, the bleeding simply continued.

At the same time, the background rise of the internet could not be ignored. A perennial issue for all print publications, Arcadia tried to adapt under new editor Masashi Saruwatari – online expansion, more doujin website coverage, even a total renewal of its style and format in 2005. Out went right-side opening and vertical text, in came left-side and horizontal, as well as a new logo, revised sections, and the occasional free DVD. A greater shift to appealing towards general audiences also came with it, further marginalising original readership.

2007 then marked a turning point for the Japanese arcade industry; amidst card games reaching their income height, the market peaked again, declining slowly and terminally thereafter as income sharing and network connection costs bit into profits. At the same time, rumours were circulating that Arcadia was facing discontinuation. These would not yet come to fruition, duly shut down by Saruwatari in the December 2006 edition. But after a few years where everything could at least seem okay from the outside, problems were now mounting.

Still, during the mid to late 2000s, coverage of fighting games remained important to the magazine’s identity in spite of other genres encroaching on its space. Every year the Tougeki championship rolled around, Arcadia offered extensive official coverage. It gained a sister publication, Tougeki Soul, with bonus DVDs handed out alongside the magazine featuring footage from the tournaments. And after Daigo Umehara came out of retirement in 2008, Arcadia were quick to release footage of him in action through this medium.

Daigo’s re-established links to the magazine and Tougeki upon his return even saw him provide his own self-titled regular column, “Umehara Column : Street”, from August 2009 onward. Offering his unique perspectives and anecdotes on fighting games, Daigo Umehara’s frequent presence was one of several which reasserted Arcadia’s centrality to Japan’s gaming culture; by 2013, these columns had been compiled into a dedicated book, Umehara Column: The Scroll of Fist – God of Fighting, alongside further original content .

Celebrating the publication’s 10th anniversary, 2009 also brought forth another new chief editor, Tetsuro Sugita, and revised design. But coverage seen in its two sister publications – Arcadia Card Game Complete, and the aforementioned Tougeki Soul – was now to be consolidated into the main mag. As circulation numbers dropped and the Japanese arcade industry continued to fall, things were on the wane, in spite of stabs at digital relevancy with paid distribution on Kadowkawa’s “BOOK ☆ WALKER” e-book platform.

After a controversially-planned final showing, 2012 saw the end of the prestigious Tougeki tournaments. The next warning sign came with its April 2013 edition; from that point onward, Arcadia became a bi-monthly magazine. A second wind of music games with the likes of Jubeat and Hatsune Miku: Project Diva, as well other successes in other genres such as Border Break and Gunslinger Stratos, helped plug coverage holes. That didn’t stop another bad omen – the cessation of high score recording – appearing at the end of October 2014.

And at the start of 2015, it finally became public. February’s issue was announced to be the last ever Arcadia. By this point, coverage of some titles had dropped to an all time low, and as a last ditch means of revenue, advertisements had increased in number; both measures were not enough to stay afloat. Not only of a declining media form, what it covered was also falling – despite growing dominance in the 2010s improving the profitability of some game centers, crane games could not occupy the same space as fading video titles in print.

The final editors column, witten by Sugita, was understandably bitter towards the industries which had allowed this – the death of a JP gaming press icon, dating in earnest as far back as 1986 – to happen. And as with many once-beloved publications, the Arcadia brand ultimately was kept on life support and subsumed by the behemoth Weekly Famitsu, with all remaining arcade coverage migrated to it.

With Arcadia gone, even accounting for a gradually dissipated relevance to Japanese gaming culture, something tangible was lost. Rival rag Dengeki Arcade stuck around for a little longer, the Internet offered the usual means of connection and resources, but neither have left behind quite the same central legacy. And cojoining it with spiritual predecessor Gamest, the magazine had been serving its purpose for nearly 30 years by 2015; close to 15 of those thanks to a team of writers who wanted to continue their passion.

Even as the long-standing trends in the Japanese arcade business continue on as ever – crane games dominate profits, video games fall further away, music and card games cling on as long as they can – it can’t be forgotten that this is a post-Arcadia landscape, one which has been spoiled by the loss of its ongoing presence.

Yet all the same, the era that Arcadia oversaw and contributed to was still a plentiful one in places, with many of the remaining glories covered. And though it may be gone in one sense, anyone who chances upon its many digital scans or overseas import listings can access one such way in which we have created a cultural Arcadia.

(Special thanks must go to @JapaneseMagScan, @ItsFantasticAC, and contributors to Retromags – without their sterling work in documenting issues with high-quality digital scans, much of this would have never been possible.)