Within the canon of video game magazines, few occupy as much of an integral and obvious place as Famitsu. To date in all of its guises, it is the longest-running publication dedicated to the subject, now clocking in at 36 years and counting with over 1770 issues at present. During those years, it has gone from monthly, to bi-weekly, to weekly release, and continues under current editor in chief Katsuhiko Hayashi. Not too bad for a brand that first began merely as a name for a small, serialised column within a bigger magazine (Login).

Only the likes of EGM and The Games Machine come close to Famitsu’s long and storied run; the previous longest-running title holder, Computer & Video Games, lost that particular claim a few years ago after the 2015 discontinuation of its online edition. By contrast, Famitsu continues to defiantly weather the consolidation, controversy, and traditional print media storm, with online content and a digital edition for years.

Aside from its endless examples of historically important coverage, it had to innovate, doing things that were less conventional and crossing over into other content channels – even influencing many more publications in the process of this. Just five of these are reflected below.

Cross-reviews
The most undeniable and visible legacy Famitsu has had is that of its cross-review section. Though not a part of the magazine from the very beginning under ASCII, it is something that has stuck with it since its first appearance in issue #10, eschewing the then-conventional longer-form reviews it and other gaming rags had done. Instead, several writers would give capsule reviews out of 10, then grouped together into an overall total out of 40. 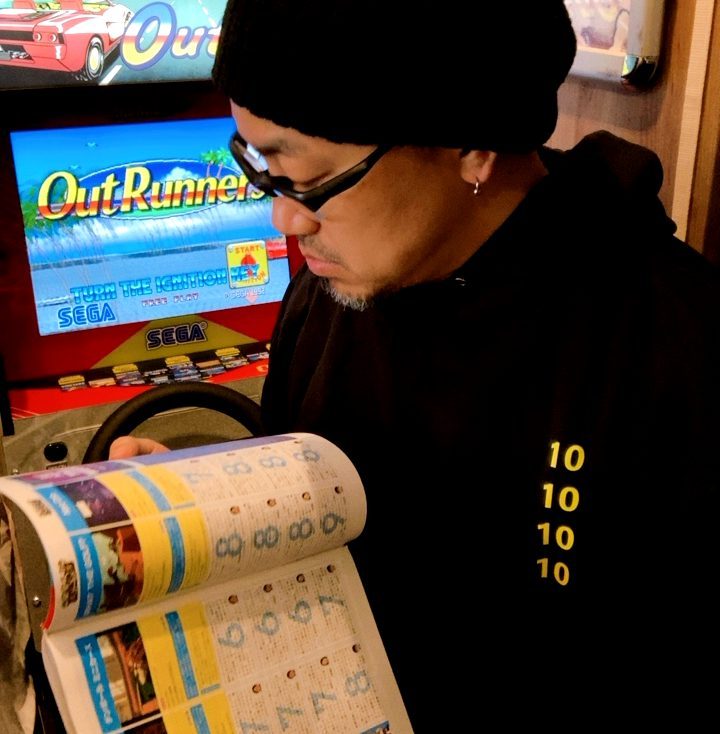 The feature was an immediate hit. Never showing any real pretence of objective analysis, it instead opted for even-handed assessments by a pool of people, yet still earning considerable influence over consumer sales activities. With this came the attendant controversies on occasion, but also inevitable magpies – from its second edition, aforementioned U.S. games media stalwart EGM borrowed the feature wholesale. 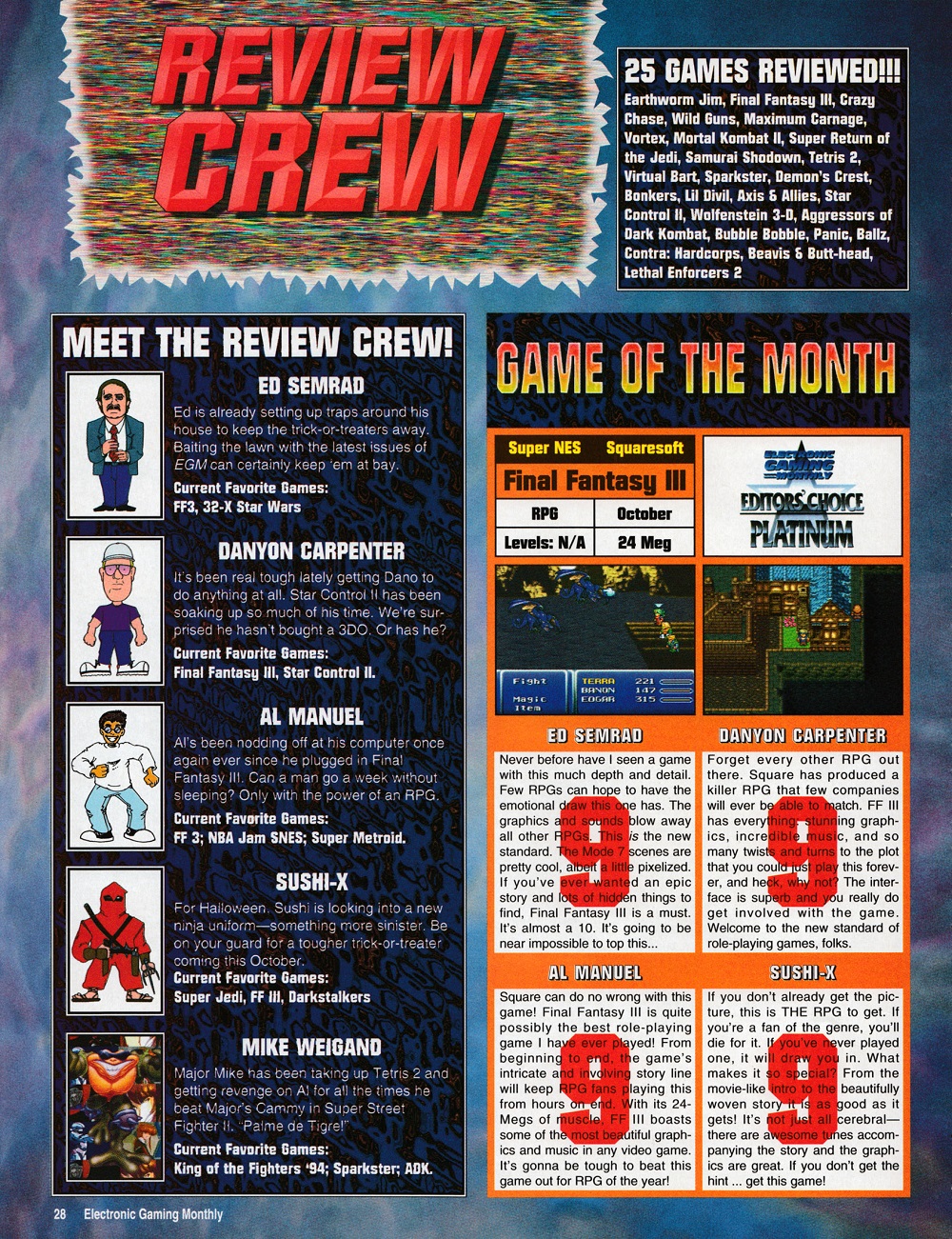 To refresh these reviews, in 1996, under the direction of the legendary Hirokazu Hamamura (now director of Kadokawa Holding group), a decree was introduced stating that titles scoring over 32 would be inducted into Famitsu’s own gaming hall of fame. Furthermore, from 1998, total points above 30 earnt certifications – silver (30 points – 31 points), gold (32 points – 34 points), and platinum (35 points – 40 points). Examples of particularly high-scoring games included Soulcalibur and Virtua Fighter 2, with Ocarina of Time claiming the first perfect 40. More recent ‘perfect’ titles include the likes of Ghost of Tsushima and Death Stranding. 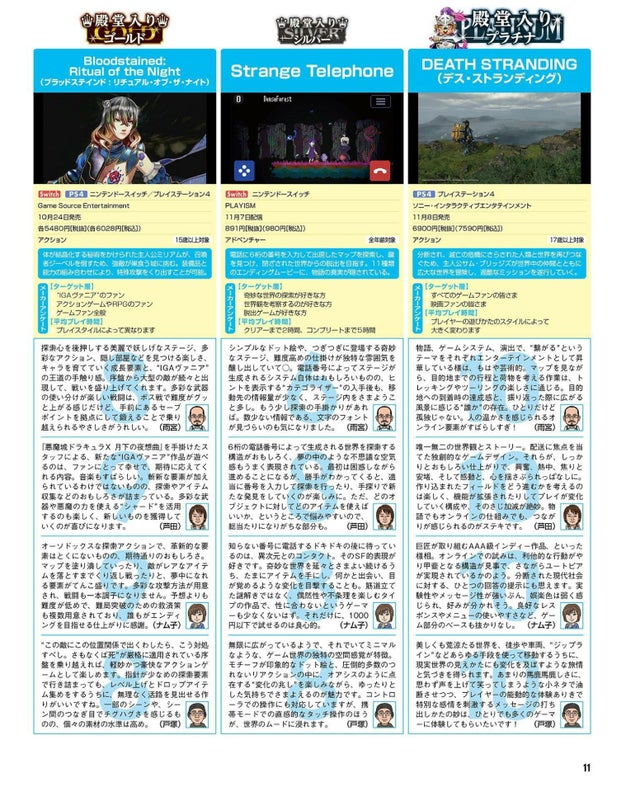 By 2009, it was reported that over 14,000 titles had been reviewed under the feature in Famitsu, and 86 reviewers had participated. Unsurprisingly so for such a long-running institution, ever since later publishing company Enterbrain came under ownership of Kadokawa in 2017, the corporation has moved fast and extensively in trying to protect the magazine’s copyright – one such way being their registered trademark of ‘cross-review’ itself.

While the cross-reviews are without a doubt Famitsu’s central impact, rivalling them in terms of sheer recognisability is the magazine’s icon mascot character, Necky the fox. 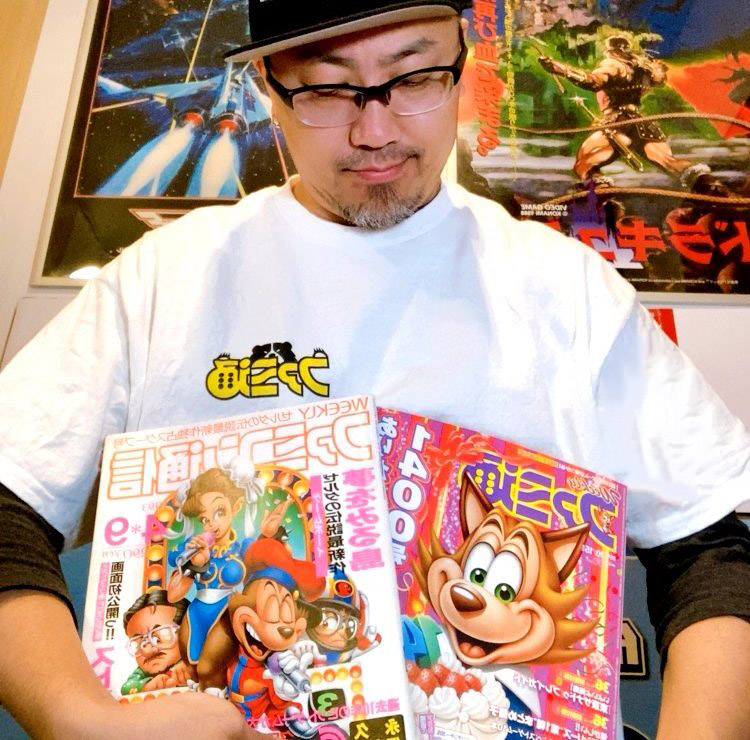 The mascot was designed by highly-talented manga illustrator Susumu Matsushita with his signature traditional American cartoon artstyle. Its name, decided by a readers poll, is actually the reverse of the word “fox” in Japanese (キツネ, kitsune) ; not only that, but a connection with the magazine’s initial main subject matter of the Famicom – i.e. fami-KON (コンコン), the latter syllable being the sound that a kitsune makes, onomatopoetically.

Necky has ultimately stayed as the representative figure of Famitsu for much of the magazine’s lifespan. Since his first appearance on the front of issue #7, he has been a constant in hundreds of covers, and his popularity and effectiveness as a mascot has been such that the fox later received toy merchandise from the likes of Banpresto. 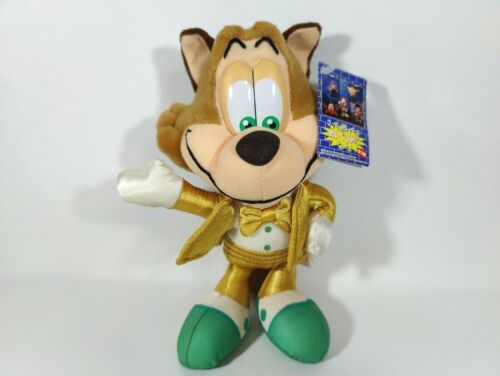 In recent times, Necky has even had something of a life of his own, randomly making appearances in other media. He notably cameoed as a costume in DLC for Super Mario Maker, was seen alongside former editor in chief Hirokazu Hamamura in Death Stranding, and as of writing, was most recently used as the mascot for Atom Toys in Children of Atom, featuring in a capsule toy line that protagonist indie game dev Nayuta Azumi collects.

Overseas coverage
For decades, Famitsu was a regular source of the international gaming press for easy access to topics that were otherwise unreachable. The alternative was a constant stream of inaccurate, mistranslated information, a pitfall that few publications could ever truly escape. Yet, from early on, Famitsu itself was already outclassing these publications with proper overseas correspondents and writers, providing better insight than anywhere else. 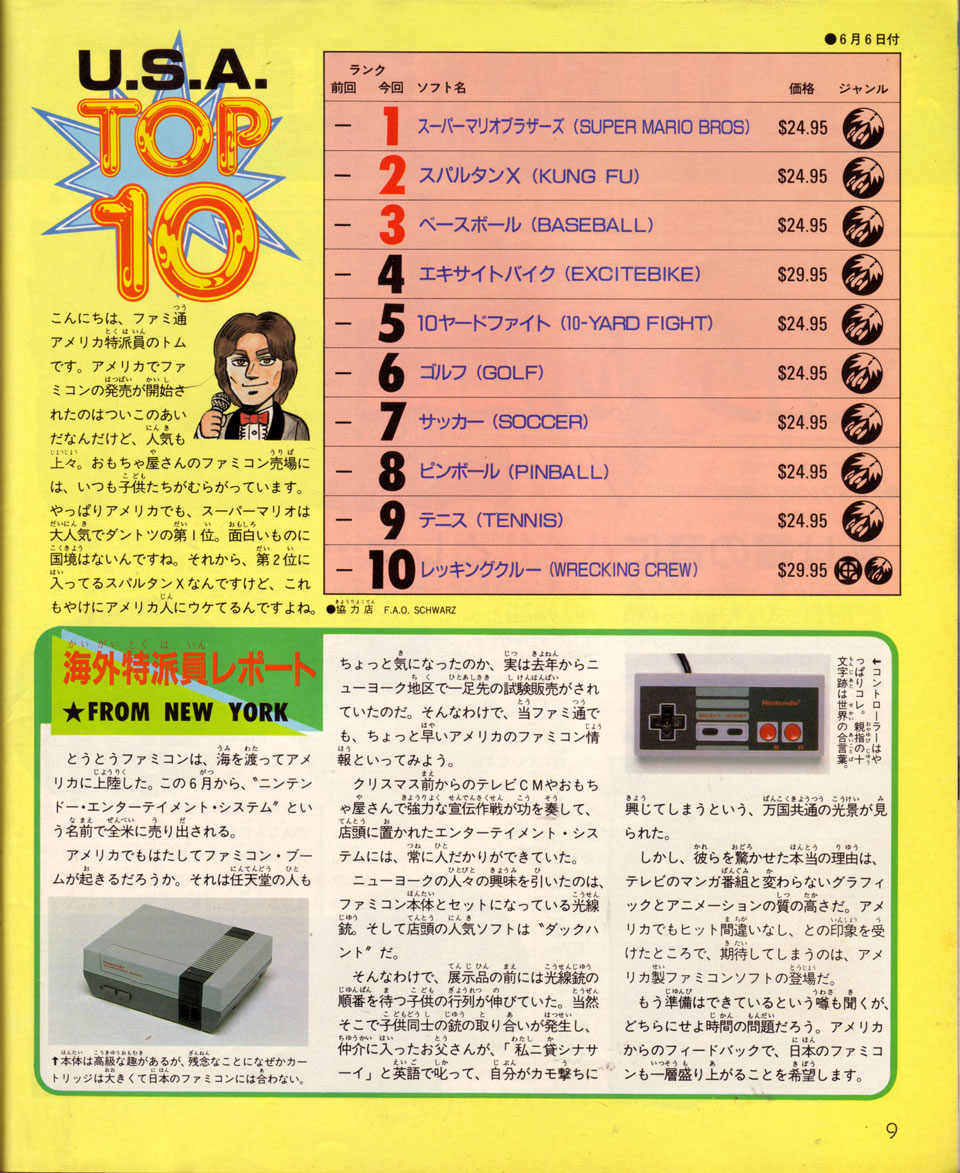 One of the very first examples of these was Tom Randolph, a USA correspondent from the beginning for Famitsu and also LOGiN magazine. The work that Randolph carried out during these embryonic years isn’t well-known, but he was certainly prolific – from covering US test-marketing for the NES when few others cared, to even translating an official strategy guide for Super Mario Bros. on the side – it duly seeing promotion in Famitsu as a result.

Over the years, numerous other overseas collaborators have pitched in on writing for the magazine; thanks to this, Famitsu has been able to cover notable international gaming events alongside those domestically. And the tradition is proving to continue on today, where even famed Undertale creator Toby Fox has taken on Masahiro Sakurai’s old column.

Game Catalog, GameWave, and Game Break
GamesMaster, one of the most notable British video game magazines, had its name and brand start out equally famous as a once-ubiquitous television programme on Channel 4. The reverse would happen to Famitsu – after the publication’s popularity had long been proven, it would branch outside of the world of print media for the first time into television (albeit only as twenty-minute filler for midnight graveyard shift and early morning slots). 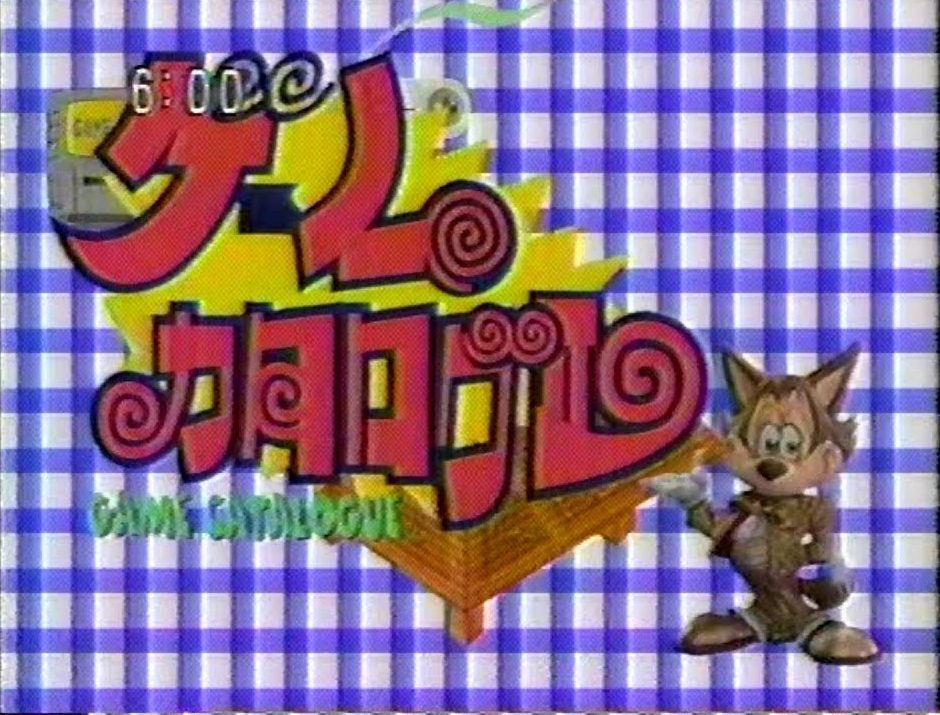 First broadcast in March 1994 on TV Tokyo, Famitsu Game Catalog was the first series in a lineage of several programmes associated with the magazine. Effectively a variety entertainment show, each episode would focus on a specific gaming-related subject e.g. reports from events such as Tokyo Toy Show, with visualised versions of Famitsu’s signature cross-reviews and rankings from the edition published the previous day interspersed.

However, its initial main hosts for studio and on-location segments, Koji Imada and Koji Higashino, were perceived by some to not be the best choice, eventually admitting a disinterest in the show themselves. Fortunately a relaunched second series from October, Game Catalog II, would get it right. It went on to long outlast the original, and was aided hugely by the March 1995 arrival of Hikaru Ijuin as its new main host – a genuine game fan, entertainment pro, and even a column writer in Famitsu itself at one point in time.

The name stuck until a 1998 revamp as GameWave, retaining Ijuin as the central host but depending less on studio-based elements in favour of more topical on-location segments (e.g. how many calories can be burned off playing DDR), as well as new comedy guests. One final revamped series, Game Break, commenced in October 2002. Now based around the narrative premise of Ijuin leading a game advertisement company with assistant hosts as employees, it did not last as long, airing its final episode just six months later in 2003.

The lack of longevity for these programmes is perhaps indicative of how the global television industry has presented much fewer opportunities than print for video games to be supported in the long-term. However, the nine years in which Famitsu was associated with them allowed hours of valuable video game footage to be filmed and televised, much of it arguably being even greater documentation of some subjects than the magazine’s coverage itself. And thanks to kukun kun, much of it is freely viewable today on YouTube.

Press Start -Symphony of Games-
By the 2000s, with television shows and a growing digital empire under its belt, it seemed like there were few other avenues for the now-totemic Famitsu to go. It had doubtlessly became one of the most high-profile games media brands in Japan, and respected worldwide. But even among those who recognised its considerable popularity from the beginning, few likely predicted that the magazine would go on to help present a series of video game music concerts that would be held across the world for close to ten years. 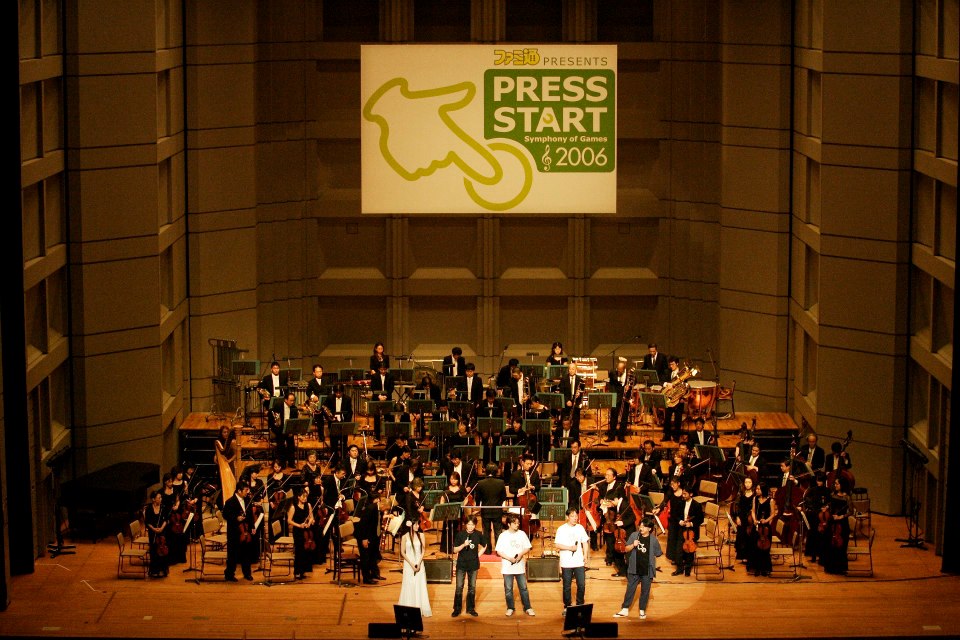 In 2006, it was announced that Famitsu would be presenting the Press Start -Symphony of Games- classical game music concert, alongside the cooperation of Masahiro Sakurai, Taizo Takemoto, Shogo Sakai, Kazushige Nojima, and Nobuo Uematsu. These came off the back of previous classical concerts that had been held for Smash Bros. and Final Fantasy by several of the participants involved in Press Start, with the new event sponsored by Enterbrain now a rare chance to showcase a more broad range of compositions.

The first 2006 concert provided by the Tokyo City Philharmonic Orchestra was a success, featuring tracks from many different games including the likes of OutRun, Metal Gear Solid 2, and a Namco arcade medley. A subsequent 2007 sequel promised to be even bigger and better, and many others would follow in Japan. Soon, the first ever overseas Press Start was held in Shanghai during 2008, and by 2015, it had even expanded to Paris, France.

That same year, the final Press Start concerts were held back in Japan, ending on a question of whether they can be passed down to younger generations. No such event has since taken place, but even if it does not return, these concerts ultimately can be seen to stand as a testament to what a brand like Famitsu can enable in video games – not only many pages of video game print coverage, but real life celebrations of the medium’s artistry. 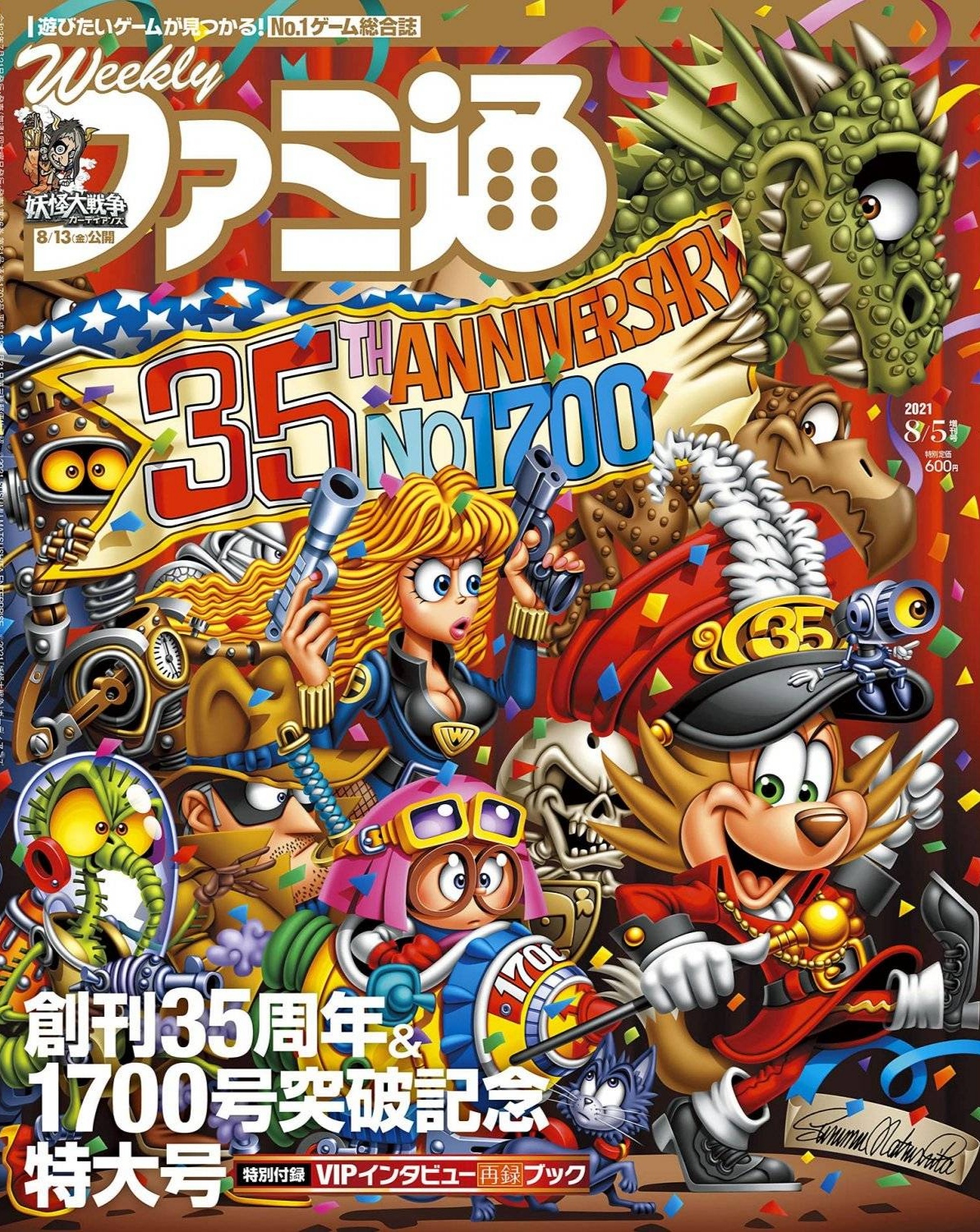 Famitsu’s long-running service providing the former of those continues on, as ever, even amidst some of the greatest challenges to its integrity and viability in years. For that, at the very least, it should be remembered.

NOW THAT YOU KNOW, YOU CAN ENJOY OUR NEW COLLECTION WITH FAMITSU MAGAZINE !!