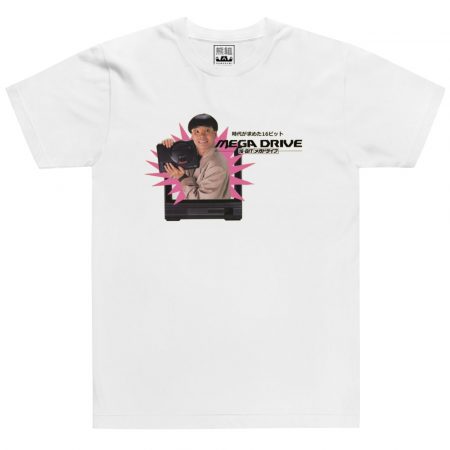 The Sega Mega Drive (メガドライブ) known as the Sega Genesis in the US is a 16bit console developped and sold by Sega. Adapted from Sega’s System 16 arcade board, the console was released in 1988 in Japan. Performing poorly in term of sales in Japan (4m copies only), the console was a huge hit in the US and Europe. Benefiting from powerful franchise as Sonic the hedgehog and agressive marketing efforts (“Genesis does what Nintendon’t”) the console was able to easily overtake the Nec’s Pc-Engine and even the Super Nintendo in its second year. With ultra cult games as Master Of Rage and Mortal Kombat, Sega became leader on the Us console market. This Sega Mega Drive Tshirt based on a typical genius japanese commercial says “The revolution is here now with the Sega Mega Drive”. TRUE.