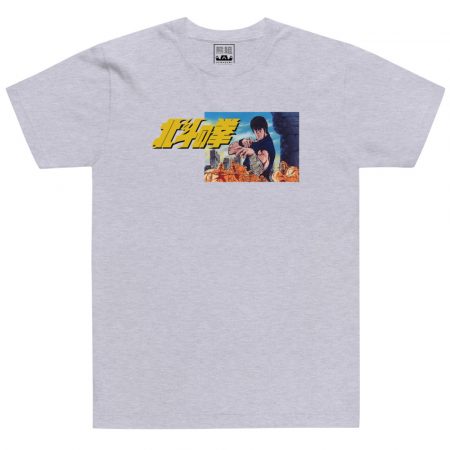 Hokuto no Ken (Fist of the North Star in the US) is a japanese manga series written by Buronson and illustrated by Tetsuo Hara pre-published between 1983-88 in Weekly Shōnen Jump. Set in a post-apocalyptic world destroyed by a nuclear war, Kenshiro, chosen as the successor of a deadly martial art known as Hokuto Shinken dedicates his life to fighting against the various gangs, bandits, and warlords who threaten the lives of  innocent people, as well as rival martial artists, including his own “brothers” from the same school. Mastering human’s secret vital points, Kenshiro has the capacity to instantly kill his adversaries just after pronouncing the cult catchphrase sentence “Omae wa mo shindeiru” (“you already dead now”). With infinite declinations (anime, dvd, video games, pachinko, ..) and more than 20 billions dollars generated, it’s one of the most profitable franchise ever.